It was my intention to see the New Year in with an early morning swim in the sea. Considering my plans for a glamorous New Year’s Eve of drinking and dancing, this was of course ludicrously optimistic. My good intentions were abandoned at some point during the course of the night, though it’s hard to say precisely when – the memories are a wonderful fuzzy blur of fireworks and Peach Bellinis. After falling into bed at 5am (following an utterly fantastic evening and an epic apocalypse of a journey home), I was really rather thankful that I had given up on my overly ambitious swimming mission.

Well, the first few days of the year have buzzed busily by and so my New Year Swim has been ever so slightly delayed. But I went today. I don’t know why it felt so important, but it did. Once I’d got it into my head that I wanted to go for a New Year Swim, I couldn’t shake off the idea. It felt significant, symbolic even – I felt it would be cleansing and cathartic – a washing away of the old year to start afresh; a beautiful, briny baptism for 2013. And it was bloody freezing. 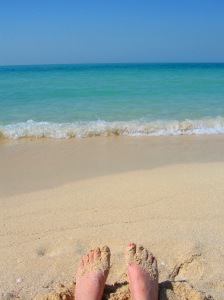 According to various surfers’ websites, the Persian Gulf was around 22°C today. That sounds positively pleasant, doesn’t it? When I swam in the choppy English Channel as a youngster, off the sandy beaches of Broadstairs, the temperature rarely got above 17°C in the summer – and it’s closer to a bracing 10°C at this time of year… The initial reconnaissance paddle today was not promising. The delicious sensation of the silken sand shifting beneath my feet with each little wave was marred by the unexpected chill of the water. I pottered casually back up the beach to read my book for a while longer, telling myself that, if I waited until the sun had made me uncomfortably hot, I would welcome the cold, refreshing water (this overheating was highly unlikely to happen, however, due to a cool ocean breeze).  A few minutes later, without a word, my husband waded in and manfully threw himself straight into a freezing wave. This was remarkable. I am usually the braver one when it comes to such things. I recall many a winter swimming trip to a nearby outdoor pool which would begin with him shivering on the metal ladder for ten minutes. I had been shamed into action.

Entering a cold sea is a battle between brain and body – the brain wills the reluctant body onwards; the body rebels in a series of panicked spasms and shrieks, attempting to force the brain into an early surrender and a cowardly retreat back to the warm and fluffy beach towel. The toughest bit is the courageous full-body plunge forward. After having remained on tense tip-toes, keeping your torso out of the water for as long as is humanly possible, hands flapping high in the air, your body is already anticipating the shock of total immersion and you have to switch off the little nagging voice that tells you it is going to be horrific – possibly even fatal. I have never felt the least inclination to sky-dive or bungee-jump, but I expect this moment is a sort of scaled down version of such bold leaps – a little voice inside screaming, “Don’t be STUPID! – we are going to DIE!!!”. But we don’t die of course; we ignore the warning voice within and, before our body knows what’s happening, we plunge into the water (surfacing a split-second later to shake the iciness from our inner ears, with eyes wide and cheeks puffed out in disbelief. This is often accompanied by a nasal snort and a sound that goes a bit like “Nnngohohhhh!!! Pffff!!!”).

Last summer I swam in the sea off the beautiful Channel Island of Guernsey. The sun-drenched beach, Ladies Bay, was virtually empty – a perfect sweeping crescent of pristine white sand – and the sea was so cold it drove the oxygen from my lungs. I had to keep swimming to maintain some sensation in my limbs. My extremities flooded with numbness as my body shut down all auxiliary functions, like a besieged sci-fi spaceship. And it was gloriously exhilarating – my brain awakened and my sinuses cleared by each brackish blast of ice water.

The sea temperature of the Persian Gulf in the summer months is usually somewhere around 32°C – sometimes up to even 37°C – it’s just like having a bath. On a brutally hot day in the desert, that isn’t even slightly refreshing: it’s not a cleansing, cathartic ocean dip, it’s swimming in salty soup. So I suppose this is the time of year to make the most of it. After today’s first freezing foray it didn’t take long to get used to the temperature (it was nowhere near as chilly as Guernsey or, indeed, Broadstairs) and, before I knew it, I had overcome my initial trepidation and was jumping waves and bobbing about happily. I was right – my New Year Swim did feel symbolic. And it bodes well, I think, for the year ahead. With a bit of luck, 2013 will be my year of bravery and buoyancy.

Leave a Reply to Homesick and Heatstruck Cancel reply 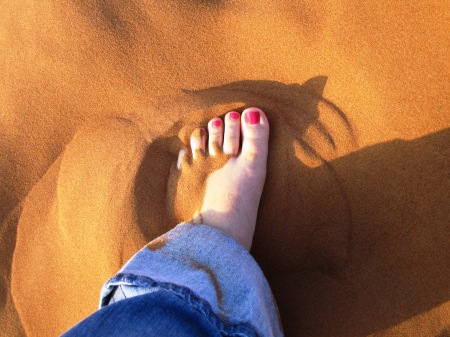