Time it was and what a time it was,
A time of innocence, a time of confidences… (Old Friends, Paul Simon) 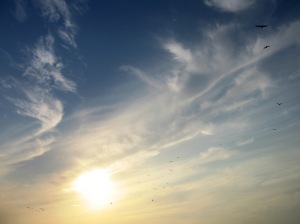 Many years ago I lived in London with three pals of mine from drama school. We had a funny little flat near Turnpike Lane which we shared with some invincible mice and a virulent species of rising damp. We painted the walls in shades of terracotta, bright yellow and sky blue. The kitchen, I believe, we painted in black and hot pink stripes, and it smelled of muesli and garlic and basil. We once found mouse droppings in the grill of the oven. The one bathroom was tiny, right outside the kitchen and had a folding louvred door (we didn’t seem to mind this extraordinary lack of privacy). The toilet frequently became blocked and I recall many a high-heeled, hysterical, alcohol-fuelled evening which would end up with at least two of us donning rubber gloves and bin liners to unblock the wretched thing with a variety of suitably long-handled implements. I remember that a guest stole all our toiletries at the end of one New Year’s Eve party. We had lots of parties. We also shared jobs. We were all registered with the same temp agency and they would call us of a morning and we would pass the phone around, deciding who would go where that day and who would rather stay in bed or bake brownies. We were, of course, very poor. They were happy years.

The four of us now live on four different continents. One has returned to her native North America, another is an expatriate in Australia, I’m here in Asia and the last has remained in Europe – London to be more specific (not in the same flat though, thank goodness – her new house is quite a lot nicer, not to mention more hygienic). We all secretly hope to gravitate back to her one day, like a flock of thirty-something year-old homing pigeons. It often strikes me as sad that a group of girls who were so close (believe me, strong bonds are forged by unblocking a toilet with someone in the small hours of the morning) are now so physically far-removed. It is, I suppose, inevitable that people’s marriages, careers and dreams will take them to new places – we are a very geographically mobile species, and we are lucky that we have the option to live in so many diverse and wonderful locations… It just seems strange that our brownie-baking, temp-jobbing, rodent-routing little gang is now so far-flung.

Almost exactly four hundred years ago, John Donne (who happens to be the ancestor of another lovely friend of mine) wrote a poem about coping with the sorrow of separation. ‘A Valediction Forbidding Mourning’ reassures the reader that the bond between people that love each other can never truly be broken – it simply stretches across space, “like gold to aery thinness beat”. He employs the lovely metaphor of a pair of compasses – the person who remains at home being the “fix’d foot”, ever-leaning toward the distant traveller, always attuned, always connected, their love drawing metaphysical circles across the earth. Donne is depicting romantic love, of course, but I believe the same is true of friendships, particularly the sort of friendships that young women make with each other during those giddy, heady, formative years between adolescence and maturity.

The cocktail of faithful friendship and feminine intuition is a potent one. After weeks without contact, my oldest pal, Lou, and I will email each other on the same afternoon, watch (and cry at) the same television programme or buy the same new top in Marks and Spencer. Last year I sent her a bag for her birthday that she had, that very week, seen and fallen in love with in a London shop. All this with more than four thousand miles between us. Sometimes I imagine the psychic connections crackling across the sky between Asia and Europe, like radio waves or the bright electricity in a plasma ball. It’s nothing of the sort, of course: just two people who have loved and known each other very well for a very long time.

As for my three drama school chums, two of the gang have had children during our years apart. The latest arrival, tiny Matilda, was born just this week (welcome to the world, little Matilda!). Separated by so many callous country miles, we coo at each other’s beautiful babies via telephones and computers. We chat about our lives, our thoughts, our work, our problems, and of course our hopes of returning home one day to be near each other once more. We talk of living around the corner from each other, of popping over for cups of tea and chocolate brownies, our children playing together in the garden, or finger-painting at the kitchen table, perhaps – swirling crazy, dreamy pictures in shades of hot pink, terracotta, bright yellow and sky blue.